In low-income countries, less than one percent of people received at least one dose of the COVID-19 vaccine.

At least 2.7 billion COVID-19 vaccines have been administered worldwide, with 40 million shots fired daily, according to Our world of data, a non-profit online scientific publication based at Oxford University.

Since the World Health Organization (WHO) declared a global epidemic last year, world leaders and health professionals have called for fair access to tests, treatments and vaccines. But that has not been the case for many nations.

Only 1.7 percent (45 million) of vaccines were given in Africa, although the continent made up 17 percent of the world’s population (1.3 billion).

The continent with the highest vaccination rate in North America at present. Two out of every five people (41%) received at least one dose. One third of the people there are fully vaccinated.

In Africa, the continent with the lowest vaccine rate, one in 40 people (2.5 percent) has received at least one stroke, and only one in 100 people is vaccinated. 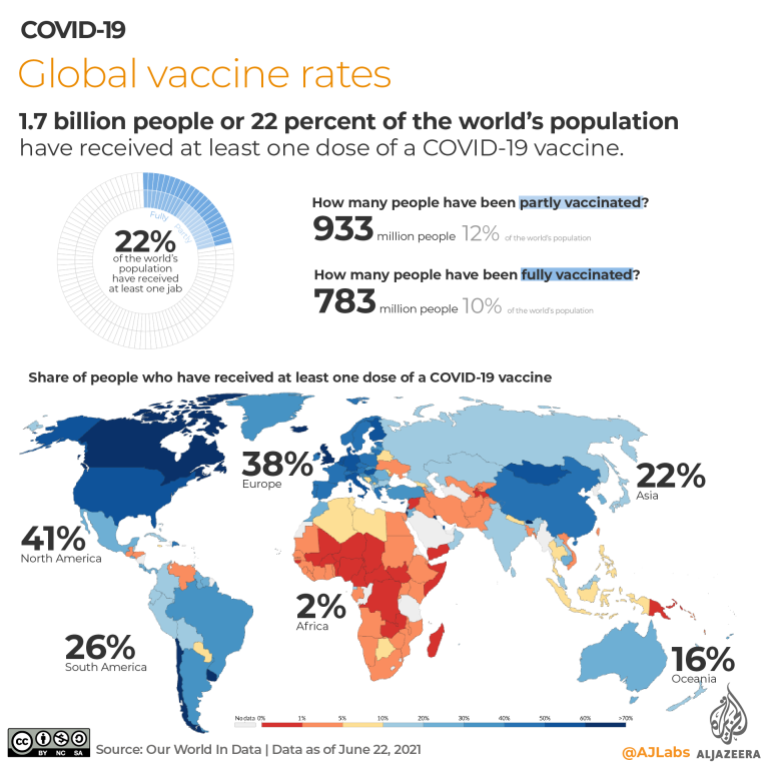 According to Dr. Bruce Aylvard, WHO Senior Advisor COVAX Initiative – aims to ensure global availability of COVID-19 vaccines – has reached 90 million doses in 131 countries. However, it was nowhere near enough to protect the population from the virus that spread around the world, he said.

Eylward added: “More than half of the countries have depleted their reserves and are demanding additional vaccines.”

Most African countries received their vaccines under the COVAX initiative, which were mainly received from OEK Indian Serum Institute,

However, the export of vaccines was stopped after the violent second wave in India. The producers then faced problems with increasing production in a short period of time.